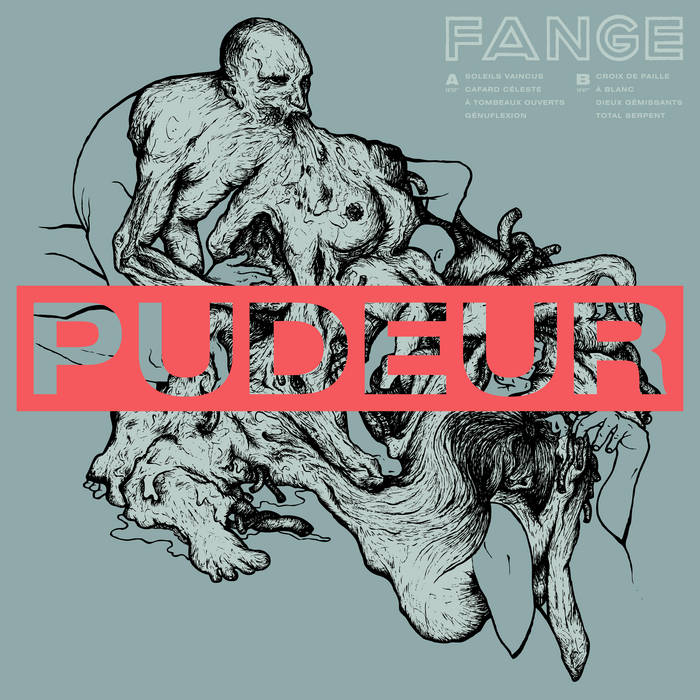 Darknight Honestly I couldn't get into other releases by Fange but this grabbed hold of me straight away and I haven't stopped listening. Love the crust sludgy noise, it's a fangtastic album. I BOW TO Fange Favorite track: Génuflexion.

French mavericks FANGE have showed many faces through their seven-year span of existence, maintaining a strong, consistent output - three albums, two EPs - despite going through several line-up changes. Boiled down to the creative core made up of Benjamin Moreau (guitars, machines), Antoine Perron (bass) and Matthias Jungbluth (vocals), their third full-length "Pudeur" marks another evolution in the band's singular journey. The breton trio returned to Cyrille Gachet (Year Of No Light, Verdun, Chaos Echoes) to track and mix these eight tracks during winter 2019, bringing the band's love-hate relationship with genre conventions to an higher level.

On "Pudeur", the band delves deeper into their obsession for beefy death metal riffs and noisy industrial soundscapes, conjuring aural body horror through crushing drum machine beats and bile-gargling vocals. Mastered by Alan Douches at West West Side Music (Converge, Mastodon, The Dillinger Escape Plan), every listen of "Pudeur" reveals more details in the band's layered sound, showing a great care for subtleties beneath their surrealistic avalanche of noise.