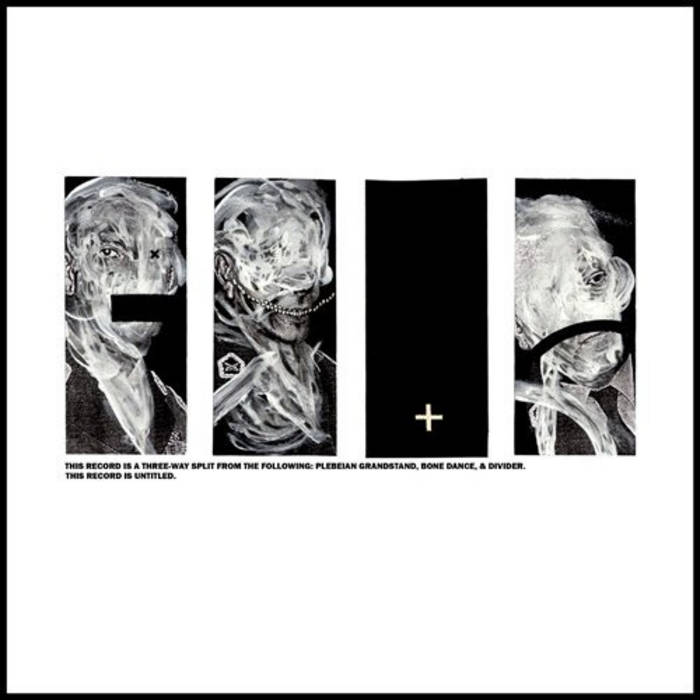 Three bands, three different interpretations of hardcore/punk, two continents, one policy: Destroy. BONE DANCE (Boise, Idaho, USA) doesn't want to be your friend. The nihilism you'll hear from these self-described "five loud dudes with shitty attitudes", playing their exceedingly raw brand of chaotic hardcore/sludge, will ring a bell whether you're into Gaza or Ken Mode, Botch or Cursed. Conceived with a colossal sense of brutality, yet never forsaking their punk ethos, "West" and "Conniver" will further consecrate this band as one to watch. Remember this goddamned name.

No matter how paradoxical it may seem, DIVIDER (Long Island, New York, USA) would prefer to unite rather than to divide. Uniting the sound of more modern filthy hardcore bands with a strong sense of punk emergency, these two tracks ("Gaia" & "Halios Geron" ) introduce Chris Tzompanakis behind the mic, best known for his work with the influential group Skycamefalling in the early 2000's. If you're into Deadguy, The Power And The Glory or Vision Of Disorder, you've found the perfect soundtrack for your next bare-knuckle boxing match.

As for PLEBEIAN GRANDSTAND (Toulouse, France), if the shrapnel-laden assault that was "How Hate Is Hard To Define" had you asking for more, this time around there won't be any survivors left to beg for a rematch. If the explosion of screaming and distortion that is "Woe Is Me" isn't enough, then the hallucinatory "Woe Is You", with its Neurosis inspired, trance-like drums, and a throbbing bassline that builds to a crescendo which threatens to tip the richter scale, certainly will be. The first time I heard these tracks, I felt like ripping off my eyelids. And I won't be the one.